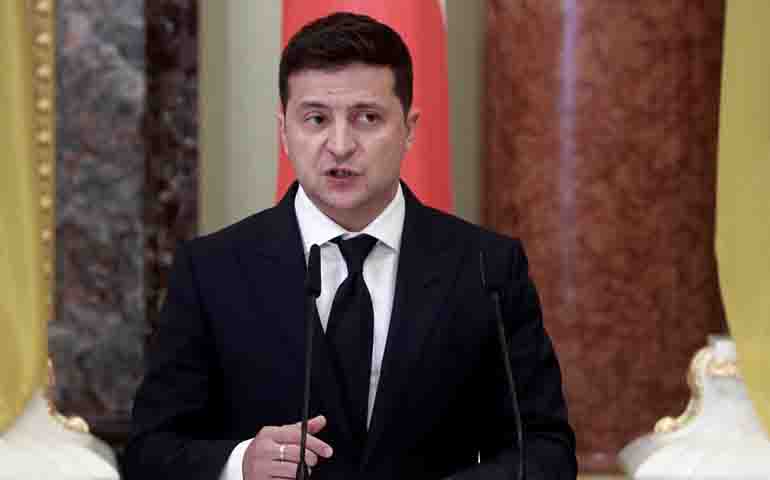 Ukrainian president addresses nation being taken to clinic with COVID-19

Ukrainian President Volodymyr Zelenskiy tended to the country in two recordings on Thursday, his first appearance since being hospitalized in the wake of testing positive for COVID-19 this week.

Sitting in a seat before a Ukrainian banner, Zelenskiy said he felt better and the administration was functioning as would be expected. He likewise talked about his organization's deadlock with the Constitutional Court over enemy of defilement changes.

The president, 42, was moved to medical clinic to self-disengage and not put others in danger, his office said.

Three other high ranking representatives, including the account serve, the protection clergyman and Zelenskiy's top associate were additionally answered to be tainted.

"As you most likely are aware, COVID-19 has not dodged me, however I feel better," Zelenskiy said.

He at that point turned his fire on the Constitutional Court, which in October struck down enemy of defilement enactment that is essential for Ukraine to get credits from the International Monetary Fund (IMF).

A previous entertainer and entertainer, Zelenskiy contrasted the court with heroes in the 2001 Hollywood heist film Ocean's Eleven.

"This isn't Ocean's Eleven, this is a redo made with the help of the Constitutional Court of Ukraine," he said.

"In any case, genuinely, they could drop significant changes and deny us of significant money related help for us, and we, as a general public and nation, don't need such unexpected developments. Spoiler alert: they won't succeed."

Zelenskiy a month ago requested that parliament break up the court, which the court's head upbraided as a "protected upset".

Ukrainian new Covid diseases started spiking in late September and have remained reliably high in October and November, provoking the administration to expand a few limitations until the year's end.

On Wednesday, Zelenskiy's Cabinet casted a ballot to force a public lockdown at ends of the week to fortify strides to control the quick spread of disease.