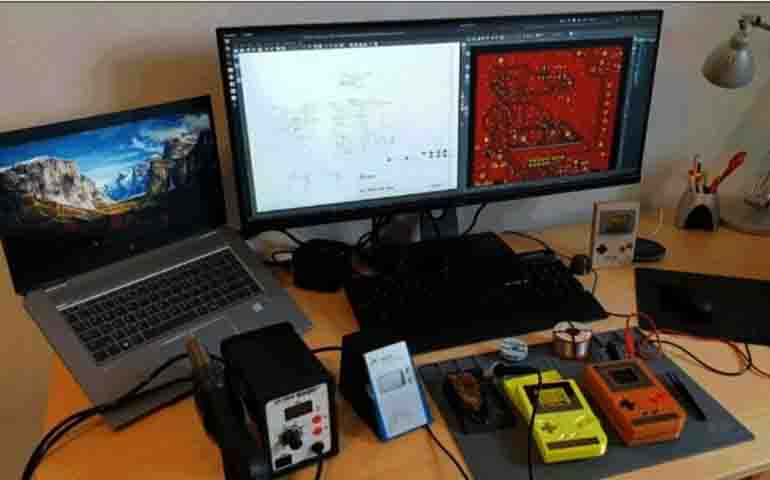 Created a game console that works without batteries. The device is powered by user presses and photocells. The device software is a Game Boy emulator with preinstalled games.

A team of experts at Northwestern University, with the support of colleagues from Delft University of Technology, has created a game console that works without a battery. The device receives energy from photocells and button presses by the user.

The main developer of the device is Jasper de Winkel. He played a pivotal role in creating a console that is half the weight of Nintendo's original Game Boy. The new device was named Engage and took about a year to create. The console is presented during the UbiComp 2020 virtual conference.

Five photocells on the front side of the case are responsible for providing the gaming gadget with energy. Energy is also generated when users press the buttons on the device. The software is a Game Boy emulator with pre-installed games.

The developers have improved the device's memory by making it non-volatile. Players will be able to continue the game from where they left off, without using traditional methods of storing information in memory. Even if the generated energy is not enough to continue the game, the current gameplay will be saved in memory and after recharging the player will continue from the moment when the screen went out. For example, in Super Mario Land, the game will continue from the middle of the jump, even if 10 years have passed since the last session.

The scientist Vito Kortbek was responsible for the development of a new type of memory. He said that traditional mobile consoles only store control points of the gameplay in memory as the game progresses. But if the battery of the device does not charge for a long time, then the memory is simply reset to zero, so that the data disappears. He created a new mechanism for saving the progress of games, which he called MPatch. Its essence is to automatically create a checkpoint when the battery is critically discharged. In this case, the memory is non-volatile.

The console is just a prototype, a demonstration of an alternative way of developing the gaming industry. He has a number of critical problems that do not allow the device to be launched into production without revision. So, if the lighting is insufficient, the game may be interrupted. In addition, the console has no sound, since the developers did not consider it necessary to add a sound subsystem - they did not want to waste time.

The device was created to demonstrate new opportunities to the representatives of the gaming industry, not for sale. Engage shows that consoles can do without batteries, which are environmentally damaging to manufacture and dispose of. And non-volatile memory, a way to save the game process, are two excellent solutions. Copies of Engage will only go to fellow scientists and, possibly, representatives of some gaming companies.